Reflecting on my writing residency on Iona has altered through the lens of the coronavirus pandemic that we’re experiencing. Many of us have already lost loved ones. And although there are plans in place for the lifting of lockdown, we don’t know when another lockdown may take place. Nor what the ‘new normal’ will be like, as we adapt to living and working with this risk. In times of disorientation, showing kindness to eachother is so important. Perhaps, to quote from a poem by Naomi Shibab Nye, it is only kindness that makes sense any more.

As Iona closed down for winter, I spent my month’s residency in relative isolation in a shepherd’s bothy, when small acts of kindness were handholds for me. They helped me scale uncertainty, leap over walls. 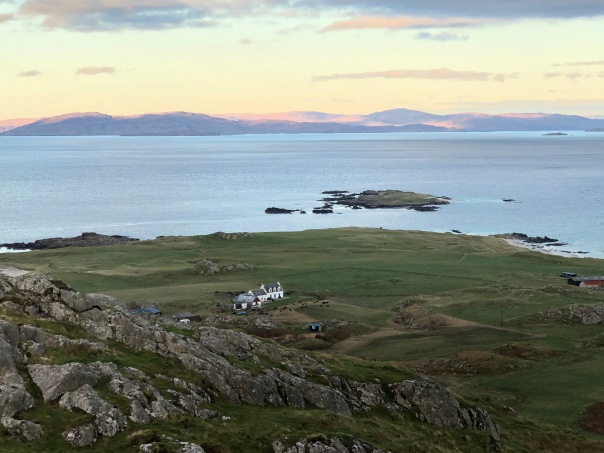 You reach the shepherd’s bothy by meandering up the pathway from Iona Hostel. The path crosses streams and twists through thickets of willow, which sing from dawn till dusk. Without streetlight for miles, long hours of darkness bookend each day; from mid afternoon, the bothy was held by thick inky black. 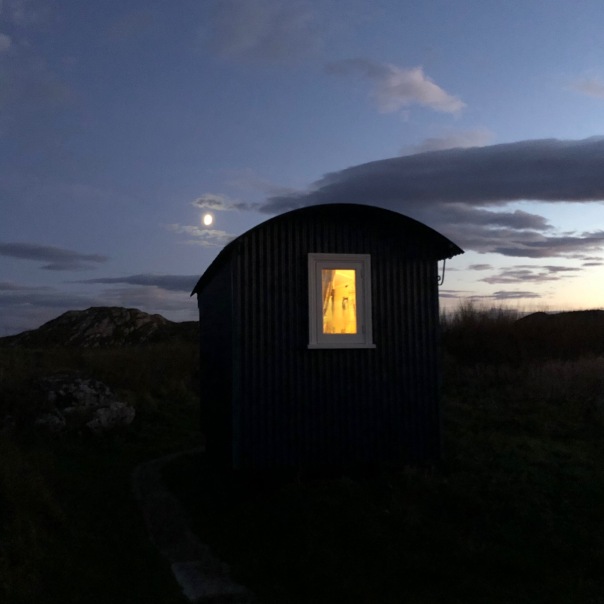 I knew I might find the isolation demanding, but I wanted the challenge and, perversely, would have been disappointed in myself if I hadn’t taken it. It was the silence I needed to hold together all the elements of the novel and work it out.

I applied for the residency because I needed time away from work deadlines to bottom out the new story, following the publication of Black Snow Falling (Scotland Street Press, 2018). I also came because I love this island. And, so perhaps unsurprisingly, it’s one of the locations for the new story. Peregrinus is Macbeth meets Romeo and Juliet, set in the 15thcentury. 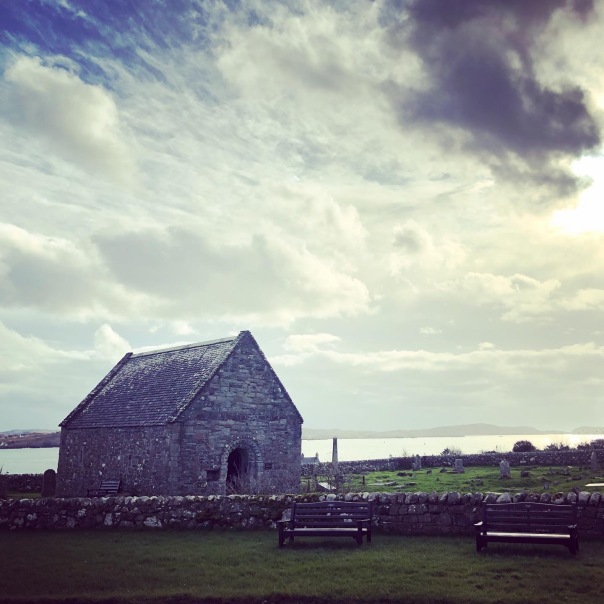 Cloudless nights offer you a sky of innumerable diamonds. Without the moon, the land is lost to your sight. With the moon, every stone and twig is silvered. A couple visiting the hostel pointed out the Andromeda galaxy and told me that it lies 2.5million light years away, the closest spiral galaxy to our Milky Way. I was up for each sunrise, opening the door to see starlings and Hebridean sheep under washes of egg-yolk yellow, peach and blue. I felt intimately connected to the earth turning and to the elements. I occasionally heard scratches and nibbles below, and birds’ claws on the roof. Sometimes gales and rain battered the bothy – I once woke up with motion sickness. 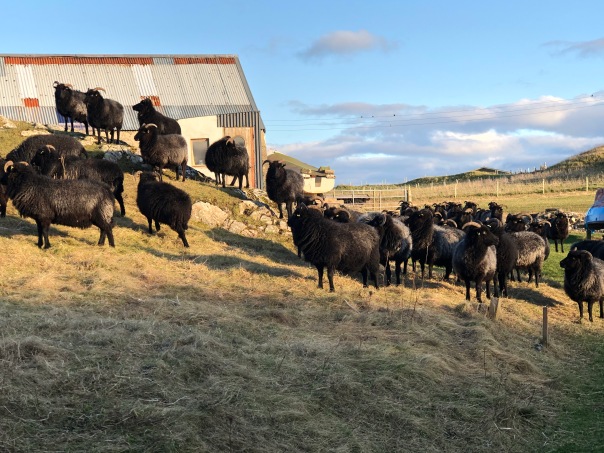 Nature plays an important role in the story so I carried a notebook everywhere. I wondered what my characters would have noticed and what they would have taken for granted. Dwelling in the landscape, focusing on every element from a mountainous racing wave to the smallest yellow celandine wavering in the breeze, I felt interconnected, both small and enlarged at the same time. As the ancient Celts believed, I felt as though I belonged to the land and the sea, not nature to us (an empire-mentality). 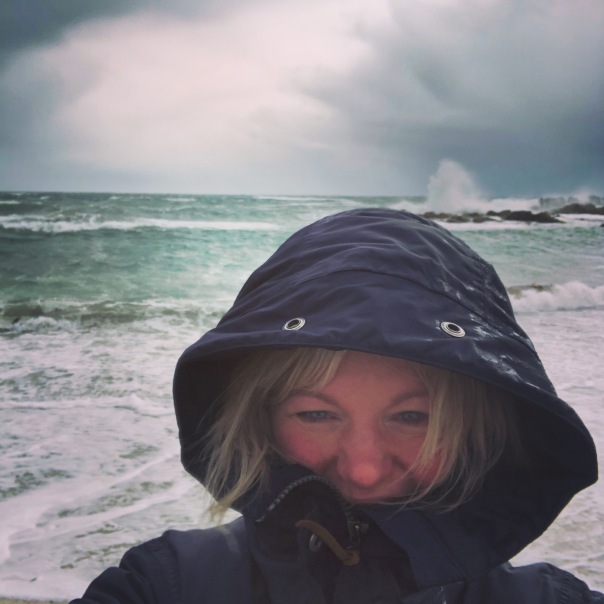 Iona is a beautiful, remote island, just 1 by 3 miles. It has drawn people for millennia in pilgrimage. The word for this in Medieval Latin is ‘peregrinus’; it tells us that humans have long needed to retreat and escape.

Talking to islanders was vital for my research and they were very kind with their time. 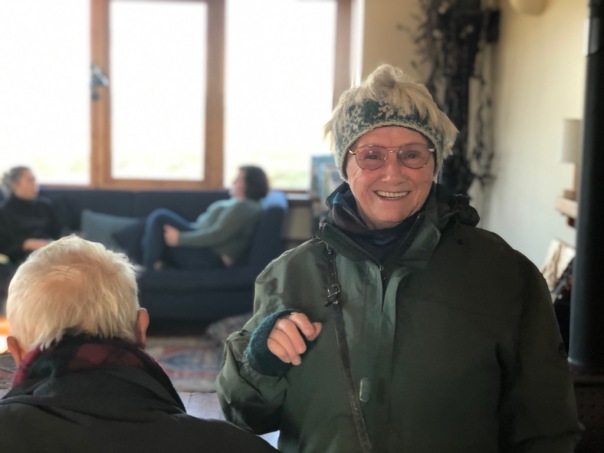 Davey Kirkpatrick, a sailor, shared about the ancient spaghetti junction of seaways and flood tides around Iona. The ladies in the Heritage Museum let me pore over displays while they carried out a stock-take after it had closed for winter. Historic Scotland staff in the Iona Abbey museum mentioned a certain yellow folder, which turned out to hold gems of research, changing the backstory for two of my characters. 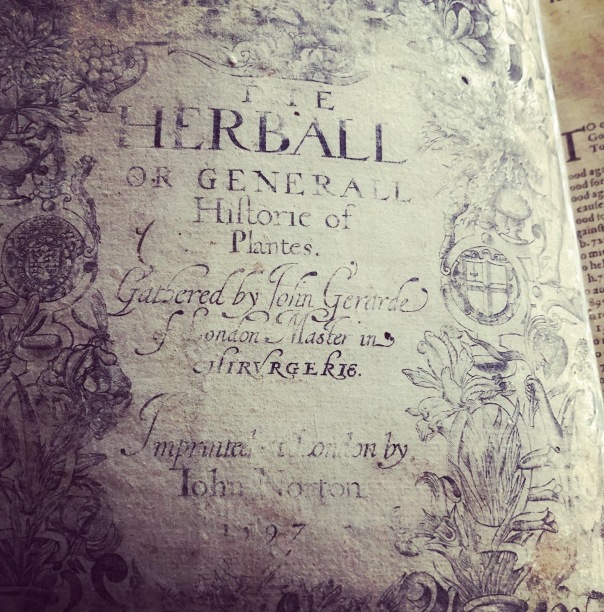 Gerarde’s Herball: John Gerarde compiled the first book of plants in the West 1597

A botanist staying overnight in the Iona Hostel told me the two books that would answer my research questions – one of which happened to be right there on the hostel bookshelf, and the other was very rare, Gerarde’s Herball, printed 500 years ago. The next day, John MacLean, who owns the hostel and wasn’t present during the conversation, brought one of his grandfather’s old books which he thought might interest her: a first edition copy of Gerarde’s Herball from 1597. Simply, absolutely, astonishing.

Gordon, a farmer, was always up for a passing chat. Early on in my residency, the island’s book group kindly let me come along one night for some company. The Rev, Jenny Earl, invited me to read in the kirk one Sunday. Marlene and Duncan in the Iona Community Shop even hosted an afternoon’s event for my debut novel Black Snow Falling, complete with mulled wine, so I could give something back to the island. 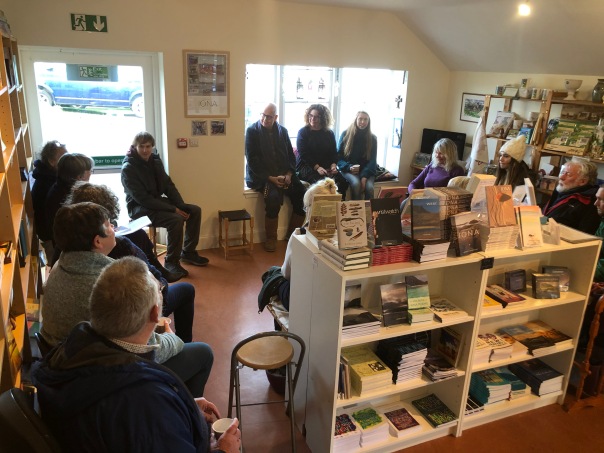 In the hostel, I came to know a series of lovely people who passed through its doors, some of whom became friends. Jackie and Andrew were so kind in inviting me to join them to eat on my first few evenings there, while I found my feet. They were lifesavers. 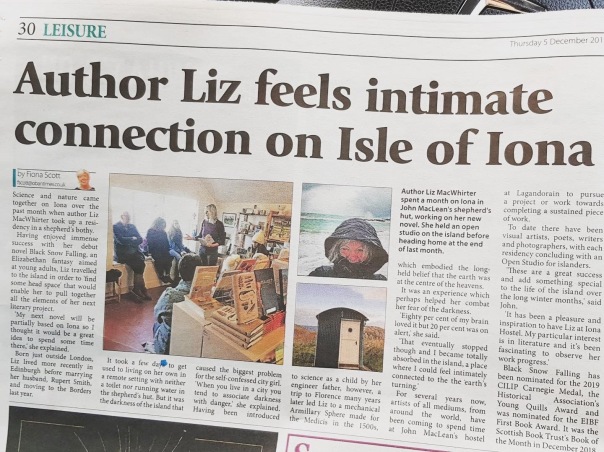 The Oban Times kindly ran an article on my residency

More volunteers, Monique and Emily, arrived to help Marc run the hostel and croft, which is owned by John MacLean and his wife, Rachel Hazel. Halfway through my residency, several visual artists arrived from all over the world for their own residencies, Jean, Katie and latterly Ellis. In November there were few other guests and the craic was good. I only had to come down the pathway for a cup of tea and a chat. There was a beautiful vibe. 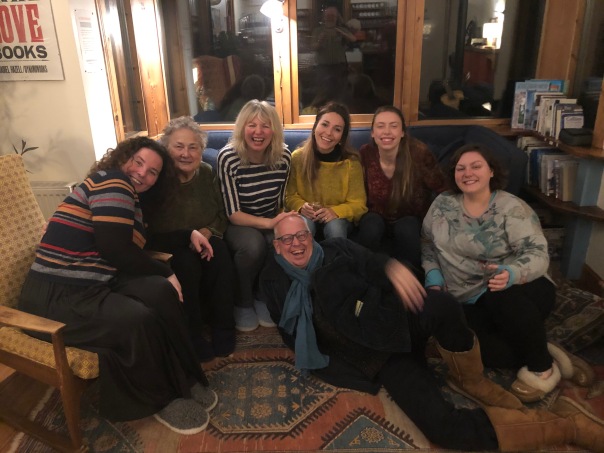 The crew in the Iona Hostel

I started this blog by referring to a poem. In it, Naomi Shibab Nye says, that before you know kindness as the deepest thing inside, you must lose things, feel the future dissolve in a moment. I must admit there were times when I felt out of my comfort zone in the isolation of the bothy. Before I came, to prepare myself, I read Learning to Walk in the Dark by Barbara Brown Taylor. She encourages us not to shy away from both physical darkness and our psychological shadows. I’ve already journeyed a long way along that latter path, but was still surprised by what took place on Iona. 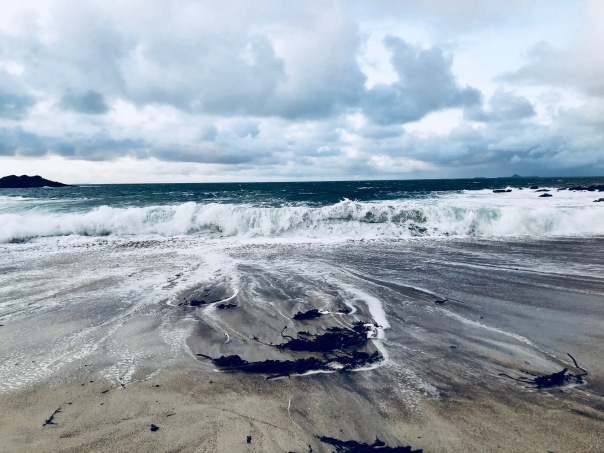 Despite reading the book, I really hadn’t expected to feel scared of the dark, like a child. I don’t think twice about darkness on my home patch. But walking to and from my cosy shepherd’s bothy, some primitive part of my brain feared that there was threat in what I could not see. I always made sure I used 1) my head torch, diligently recharged during the day and 2) the torch on my phone, which was also quietly playing my favourite tracks. Twice, I had a strong sense that a figure was coming up behind me, and I’d whirl around to see just the dark. I realised it was only my imagination (those who have read Black Snow Falling know what a scary place this can be). When it happened another night, I forced myself to walk on without looking behind. These were echoes of a memory. Long ago, I was assaulted, and for a while it completely took away my sense of safety and security in the world. The fearfulness was also caused by a strange email I received a few days after arriving on the island, from someone who had been triggered by something I had written. Without going into details, they wrote as if to silence my voice – it felt like my nemesis. Except for one miraculous hour that evening, I couldn’t get any mobile reception around the bothy. It was so hard to process in isolation that this ‘nemesis’ did actually stop me writing for the first week or so of the residency. However, I came to see that, like the imagined figure I’d projected from a memory, this person was likely to be projecting something onto me – this harshness is as much a part of being human as kindness. All of our humanity is compost for writing. I coped by throwing myself into more research, dwelling in nature and valuing every chance meeting. Ultimately, the ‘nemesis’ has worked for good. 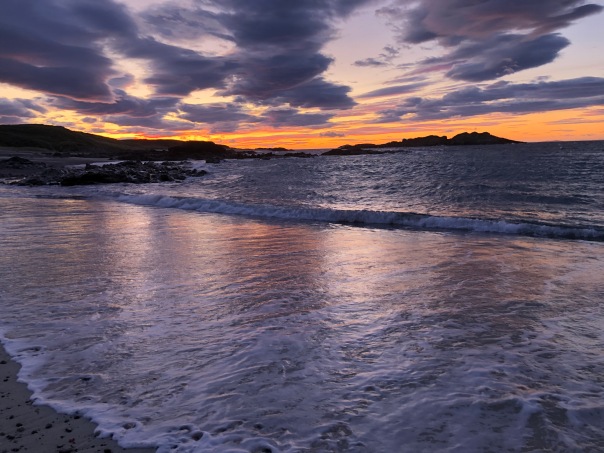 The sea unfolding her bolts of silk

I learned that fear and anxiety can be amplified in alone-ness. I discovered new vulnerabilities – and found new ways to handle these.

One or two islanders I asked expressed no fear of the dark, and I realised my characters would have felt comfortable, too. Yet old Scottish Gaelic stories are populated with malevolent sea people and children snatched by spirits and brownies. Mysterious things did happen. 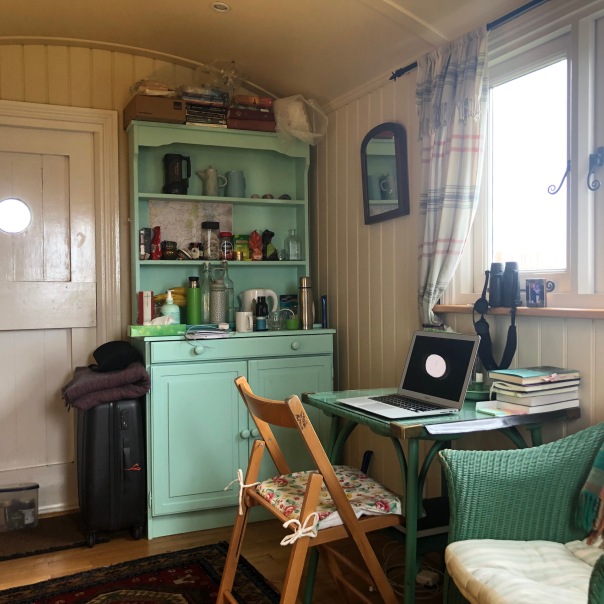 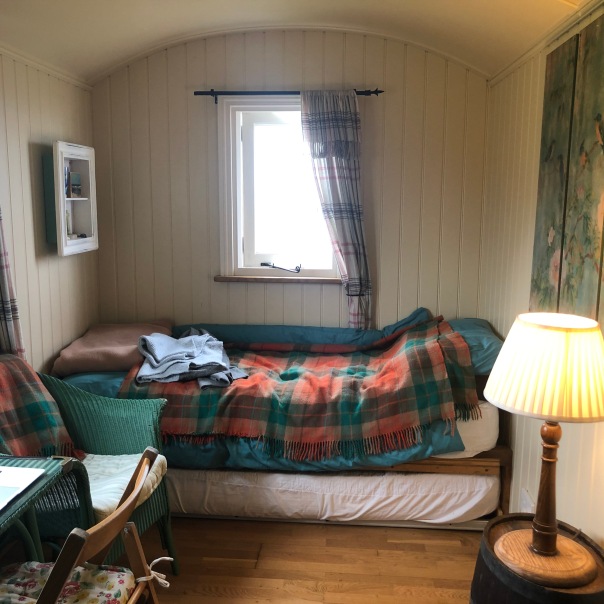 One Saturday, it was sunny, I was in the flow of writing an undramatic scene set in the daytime. I was feeling at peace, happy with the progress I was making on the novel. But a sudden, very loud banging on my door shook me. In the two steps it took to reach and open it, adrenaline flooded – surely one of the girls from the hostel would have knocked gently, not wanting to disturb the writing, perhaps even calling my name. (In fact, no one came up unbidden the whole month.) But there wasn’t a soul there. 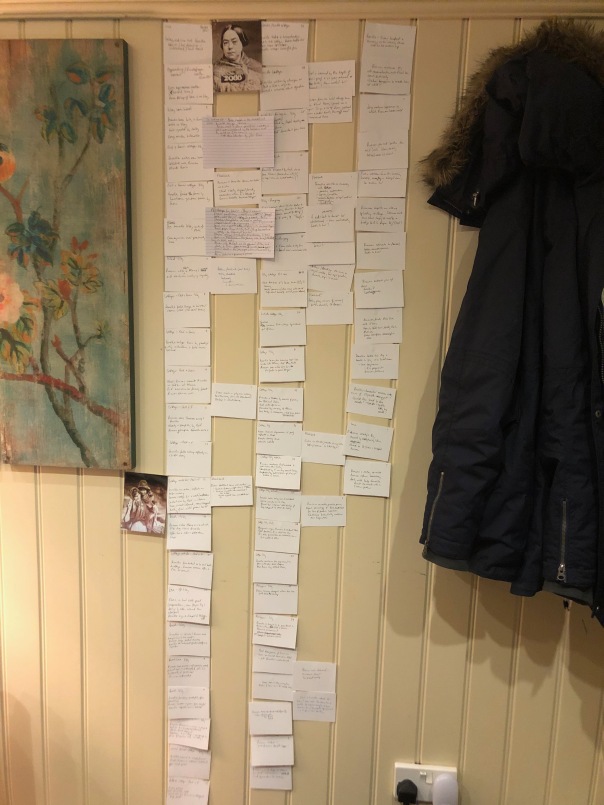 Working out the plot in the shepherd’s Bothy

I ran around the outside of the Bothy – nothing. I ran down the path to the hostel (the only access to it) – deserted. I stayed in the hostel that night. The next day, John found me and suggested it was a seagull’s webbed feet, as he had once heard a similar sound on the hull of his boat, and I was grateful for a plausible explanation.

Over the weeks, I made myself ‘re-code’ my fearfulness, seeing it as excitement, which is very similar physiologically. I found out about life in the night: the animals, photosynthesis, glowing phosphorus at sea. I chose to feel ‘held’ by the night, shadows and all.

Chasing down our fears, after all, is where powerful stories come from. 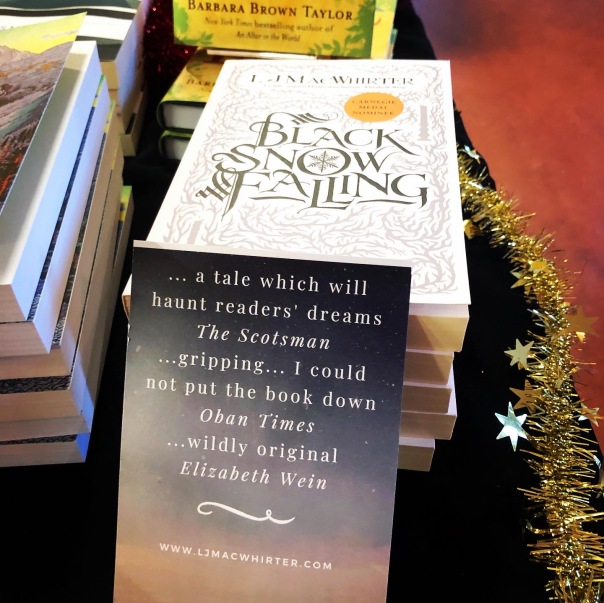 That’s why each kindness I experienced over the month on Iona felt so significant. The greatest of all was shown by John and Rachel at the Iona Hostel, who were so warm and welcoming. I am not alone in being moved by their generosity. They help many people, particularly the artists and writers to whom they offer subsidised residencies through the winter months.

All the elements of the writing residency had a profound impact on Peregrinus, not least the beautiful, slow time on such an historically significant island.

Each winter, the islanders rely on their communities in a way that that many of us are now experiencing in this pandemic. They look out for each other, while still respecting the privacy which is important for island life. 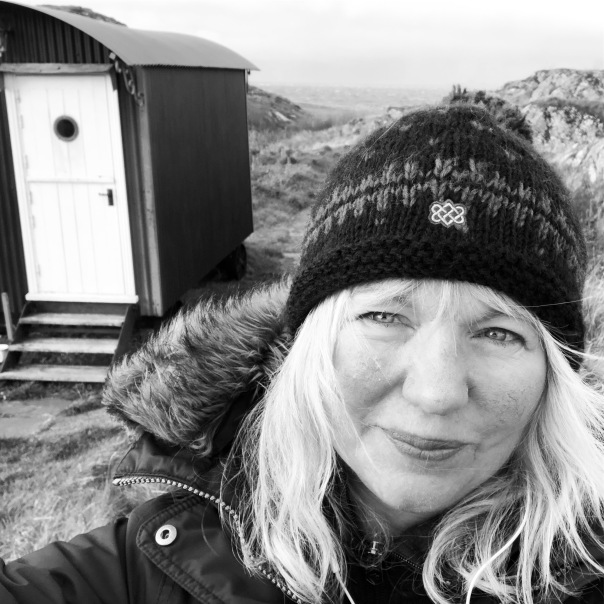