Here’s the Abbey. I’ve been to the village, I’ve bought my groceries from the Spar, I’m walking back to the hostel when it starts to rain. I’ll “keep rain” in the chapel (as we say in Finnish), I say to myself, and do just that. The chapel is empty. The ferry’s cancelled today, so there are no tourists around, except for me. When I open the heavy black door to the chapel, it feels like I’m opening a tomb. Old old air comes out and I step back, startled. Where am I entering? What am I entering? This chapel is a tomb and it is very old. It’s also very dark and lonely and silent. After a few breaths, I’ve overcome my fear and make another go of it. Only a flickering red light from the candle on the altar sheds some light in the tomb-chapel. I light another one and think of all the people I once knew but who are now dead, and still very much alive in my mind. “I’m here alone,” I think, and the longer I think about it, the better I start to feel.

We sang in St. Oran’s chapel, me and the other women from the hostel. Our voices echoed from the old walls as if sound could travel in time and we would wake up the kings who slept in their graves. A curious robin came to hear us too. She sat by the door and listened to our harmonies of “Amazing Grace”. I have a video of us singing. We smile like lunatics and look so happy, like we’ve all found something we were looking for. 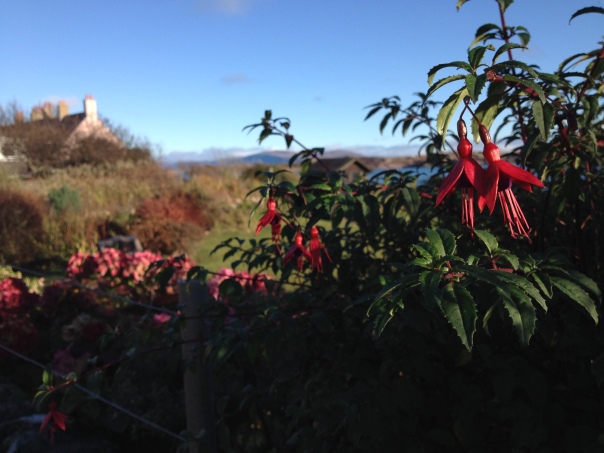 It’s my first week on the island. Some days are like summer days, at least this one. I sit in the garden by the ruins of the nunnery, once full of industrious women, drink my tea on the bench and admire the flowers that are still in bloom, fuschias and some purple ones that I don’t recognise. To me it’s a miracle that anything can bloom in November. Back home, in Finland, November is the month of death. Nothing grows anymore and the days get shorter and shorter until there’s no light left. This island is paradise to me.

I can imagine the nuns working in their garden and it seems like such a happy life to me. Those happy women! Filling their days with gardening, prayer, reading and writing, without the restrains and threats of marriage and motherhood. I feel like I’m a sort of a nun, coming here to Iona to write, to read, to walk. Back at the hostel, we talk about the nunnery and others point out how harsh it must’ve been for the nuns with food being scarce and Vikings raiding the shores. I tend to idealise the past, I know, and yet, I won’t let go of my image of a community of women, working in their garden. At least one of them must have been happy, sometimes. There must have been days when everything was fine, like this one. The sun so hot I start to sweat, flowers in bloom, birds chirping in the bushes.

My friend Kenji is visiting from Southern England. It’s a glorious day and we decide to climb Dun I. I’ve been on Iona for several weeks now, but I haven’t climbed the highest point of the island yet. I’m not adventurous, I say to people, and part of that is true. But I’ve been looking at Dun I a lot. The sun sets behind it turning it into a black silhouette of a mountain. We are nestled beneath it at the hostel. Now I finally sit at the top and look at the setting sun with my friend. Such a glorious day. No wind, no clouds, warm like it was spring, not winter. This is the first time I see the sun actually disappear below the horizon. From the north side of the island you merely look at the sky, and as the colour changes, you know the sun is gone. We drink peppermint tea and I eat a tiny chocolate covered roly poly. It tastes so good and I’m happy and curious and out of breath.

White Strand of the Monks

I go to the beach a lot. The one just next to the hostel is the most familiar, most comfortable place. It’s easy to get there, you just step down at the earth’s edge and skate down on the white sand. But on days when the North Beach seems too familiar, too comfortable, I walk to the tip of the island, to the beach they call The White Strand of the Monks. The rocks there are black because a bunch of Vikings killed a bunch of monks a long time ago. They say that sometimes you can see a ghostly Viking ship appear from the distance. Do the Vikings come back to finish what they started? Or do they just like these shores, like me.

History is often about men killing each other. When I stand on the beach and look at the waves crossing each other like in some kind of rough dance, I don’t see monks, or Vikings, but the presence of what’s still there: the sea, the sand, the sky and the mountains on the other side. They change daily, by the second, but defy such human ways of counting time. For them, there is no time, except that which continues. The waves keep hitting the shore, like a giant washing machine. The sand keeps getting whirled about and rubbed into smaller and smaller grains. And the sky looks on, indifferently, at what happens below, and I like to look at it, since it’s bigger than me and above me and full of order and chaos. 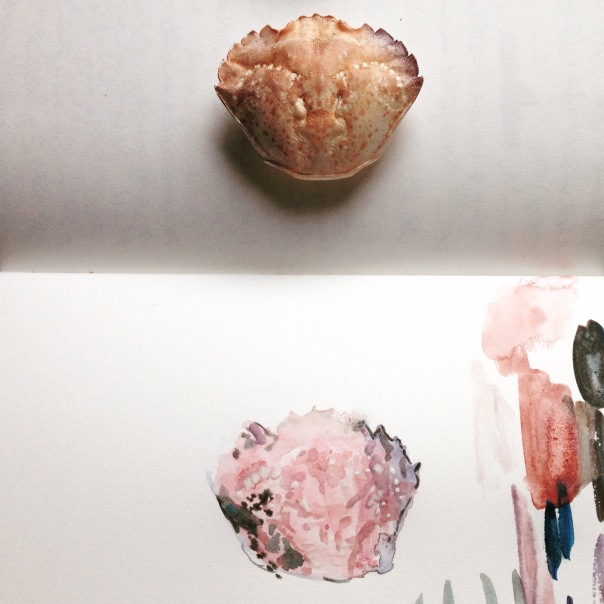 The sofa is where I begin my days and where I often end them. I wake up late, later than everybody else, so the kitchen is usually empty when I have breakfast. I take my tea, my book and myself and sit by the big windows. Sometimes I read, but mostly I just look at the landscape. The sea is on my right, the hostel kitchen on the left. The sky is big and looks different every day, every moment, so it’s important to keep a close watch on it. The sheep are black dots that move across the grass, the machair, and go about their day. Now they run across the window in wild panic. Now they appear in a neat line, one after the other, pausing in the middle of the path like obedient children. I’m especially attached to Poopy Bum, who has poop stuck on his bum and who is old and cannot quite keep up with the others. One day I stand and watch how he looks longingly at Marc and Caroline, the volunteers, who are having a conversation on the other side of the fence.

The Christmas tree next to the sofa is full of decorations, an Art Deco Santa, another Santa on a wooden boat on his way somewhere, a glass bird with “Love you” written on its body. I never get tired of watching the decorations or this view. When I’m down, it lifts me. When I’m happy, it elates me. I walk down to the beach to watch the sunset and think to myself: It’s worth being alive when you can come to a place like this. We’re the lucky ones. The sofa has been my centre for these past few months. The people around it have been my family, the hostel my home, the island my world, and I have been the lucky one.

Vappu Kannas
Vappu Kannas is a Finnish writer and researcher. She spent November and December as writer-in-residence at the Iona hostel. Her chapbook As an Eel Through the Body, co-written with Canadian poet Shannon Maguire, appeared in 2015 (Dancing Girl Press), and she is currently working on a novel based on the life of Emily Dickinson and her sister, Vinnie. Her PhD dissertation explored the diaries of L.M. Montgomery, the Canadian author known for Anne of Green Gables, and incidentally Montgomery also visited Iona on her honeymoon in 1911.